A premiership in 2020, and back to back Ken Allen Medallists, along with Player’s Player recipients, the Joondalup Giants have drastically changed their fortunes in the last couple of years. While we have seen COVID have a negative affect on the country, the Giants have gone about their business on and off the field to build a northern juggernaut. With a tough semi final loss behind them, they will be on the war path in 2022.

Coaching
After 2 years at the helm, with 2021 as the club president as well as head coach, John Harbin has moved on. First premiership in 20 years and some well needed professionalism put into the club has got the Giants in a good spot. And taking over the reigns is the hugely respected Taurean Sheehan. The reigning Ken Allen Medallist from 2021, he will call on all his expertise this season to take the Giants to another level. But can he succeed in his first crack at the senior coaching reigns? He will require an able assistant, much like John’s capable offsider Andy Walker.

Gains & Losses
Lets start with the American, Travis Haney. Arguably the best winger in the competition in the final month, he finally started to get the hang of the “Rugby League” thing towards the end of the season, so gaining a gun winger at the very start of the year is a bonus. But also in interesting news Giants stalwart Daniel Sneddon has been seen at preseason training, along with Tui Lasike, who looks like returning home from the Alkimos Tigers. Both are proven first grade centres in previous times, and if fit can make their presence felt.

In terms of losses, the Giants have one of the more settled teams in terms of spines. Beau White is still returning from a bad leg injury towards the end of last year, but we should see him at some stage. Robbie Smith looks to have moved on, which will leave a vacant fullback spot up for grabs, and coach/player Andy Walker probably won’t be there. And the big question remains will Lee Te Maari go around again? The ex-nrl player and Giants diehard has had a massive impact the last couple of years and his dominating presence on the left edge will def be missed.

Draw Snapshot
The Giants open with a 2 week stay at Admiral Park. They host the rejuvenated Fremantle Roosters in the opener, with many people interested to see how both sides open up. Round 2 is the traditional northern derby with the Sea Eagles, with the Giants having a bit of an axe to grind, after they didn’t rise to the occasion in their semi final last year. And they resume hostilities with the Ellenbrook Rabbitohs in round 3 at Charlottes Pavilion to open up the home season for the Bunnies. 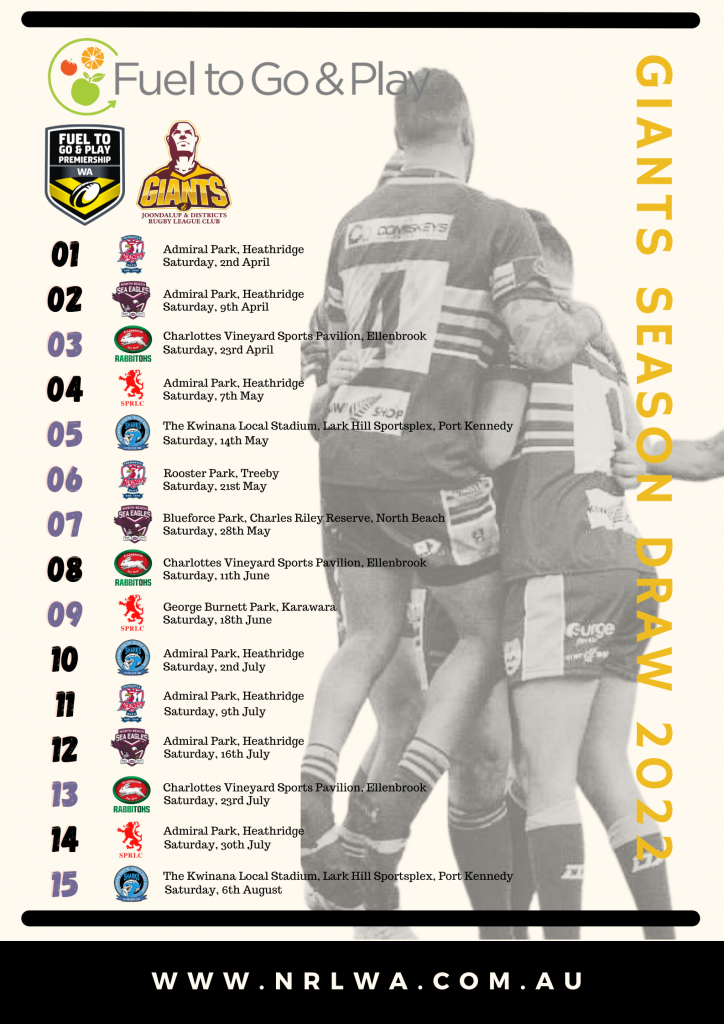 Conclusion
Joondalup appear to be one of the sides least affected by player movement and retirements. If anything they are adding some considerable talent back into the side. But there is some serious leadership and experience walking out. But they have proven themselves a force to be reckoned with in last few years, and 2022 looks like it won’t be any different.