The defending premiers have had an interesting last few years. Back to back runner ups in 2018 and 2019, a winless year in 2020, and then a fairy tale golden point ending  in 2021 has most people wondering what will the Sea Eagles do in 2022. Will they return to the bottom of the pile following a bunch of retirements or will their youth stand up and be counted?

Coaching
David Wallis had a turbulent two seasons at North Beach, but after reaching the top of the mountain has stepped away from the head coaching role. Stepping up to the mark is last years Reserve Grade head coach, Phil Douche. Highly respected and considered to have a very adept football brain, it will be interesting if he can get instant results out of his troops to start the season. But he is ably supported, with club stalwarts and WA Legends in Craig Phillis and Jason Godecke the assistant coaches this year, this seems like a recipe for success.

Gains & Losses
Well lets start with the latter here. And it could be a big list of losses. Retirement is a word that gets thrown around alot, but like John Farnham some of the names have come out for one last song a few times. Regardless, it looks like the following won’t be back. Josh Benjamin, Cairo Takarangi, Ben Lindegaard, Ben Taylor, Adam Roy. And then the questions around players such as Kani Solomon and Jayden De-Vorms always linger about whether they will be back. That’s alot of class and reliability that won’t be back, which includes both halves.

Now for the good news. Joint 2019 Ken Allen Medallist Jeremy Wallace will be back at the nest. Ron Hudson Medallist Bowman Stein is also still there, along with young guns Bailey Millar and Kobi Aiesi, and with his elevation into the first grade coaching side, it may see the super talented Jason Godecke play a full season in the top grade to usher these players along. With some other youngsters such as Ryan Woolley, Alex Harmer and Beau Constable in the ranks, and a year older, the Sea Eagles won’t be lacking in talent.

Draw Snapshot
In a 6 team competitin, its 15 rounds, where you play everyone 3 times.
The Sea Eagles will start their season with a grudge match against their vanquished grand final opponents South Perth Lions, before a traditional northern derby in round 2 against the imposing Joondalup Giants. They finish their first 3 games with a big game against the Fremantle Roosters, who many consider to be one of the sides to watch in 2022. It is the toughest opening 3 rounds anyone could ask for. 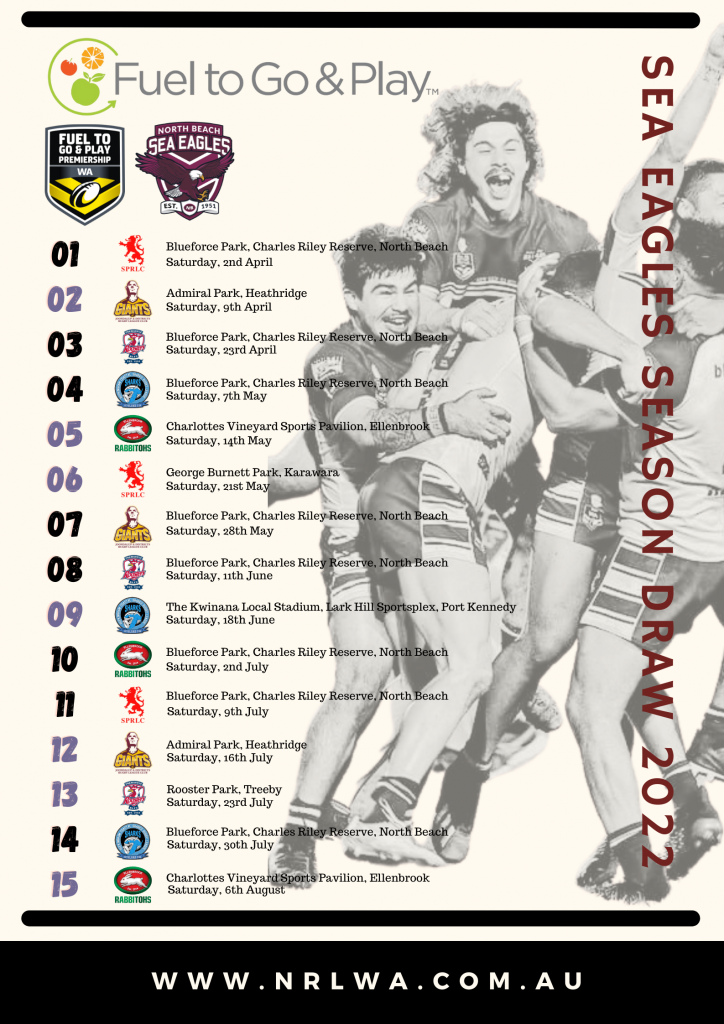 Conclusion
Probably the hardest team to judge this season, when they lost similar talent recently, the proud club fell off a proverbial cliff. But with some young superstars returning and the club hard on the recruitment for some hard men up front, it seems like it could be another banner year for the proud club.