It was 1996. That was the last time South Perth Lions had a stretch that was 8 years or longer before winning a First Grade Premiership. The pride of the NRL WA competition, they are a foundation club, and will be looking to rectify this drought and get to the top of the pile. But it won’t be easy. Losing a heartbreaker in extra time can derail your next season, as shown by the Rockingham Sharks in 2020, and demons can sometimes linger.

Coaching
WA Legend Daniel Green is back in the player/coach role for the 2022 season, after falling devastatingly short in his first season fully in charge. While co-coaching previously, last year was the first time he was calling the shots on his own, and the Lions were back to their high standards. Will probably be ably supported by Angelo Tsakalos, who has proven incredibly smart and capable running the side on game day while Greeny plays. Can the pair go one better in 2022?

Gains & Losses
Now first of all, I’m counting Nick Holiday as a gain. Last year was his first season, and it wasn’t until the very end that he started to click in a big way and produce for the Lions. Outside of that, the return of Tyler Thomas last year was immense. He found his way towards the end of the year, and was close to the best player on the field in the grand final, and the best centre in the competition in the closing stages. Along with these, their youngsters, the likes of Tere Cameron-Ramea, are another year older and ready to take this competition by storm.

But they too will need to overcome some big hurdles. Harry “Iceman” Debique has moved back to New Zealand, and the persistent rumours of Eddie Proudler’s body betraying him will not go away. Together they would be a devastating loss. Can young Luke-David Wells-Talamavaio bridge the gap? Will Isaac Thomas go again to add depth to the squad? These are the questions that pre-season will go a long way to answering.

Draw Snapshot
The Lions will start their season with a trip up to Charles Riley reserve against their arch rivals, the Sea Eagles, before an opening home game in round 2 against the returning Ellenbrook Rabbitohs. They finish their first 3 games with another home stand against the Rockingham Sharks, who will be desperate to prove their worth in 2022. While an intimidating round 1 match up looms, a battle hardened Lions will be ready to rock and roll and will believe they can go 3 from 3 to start the year. 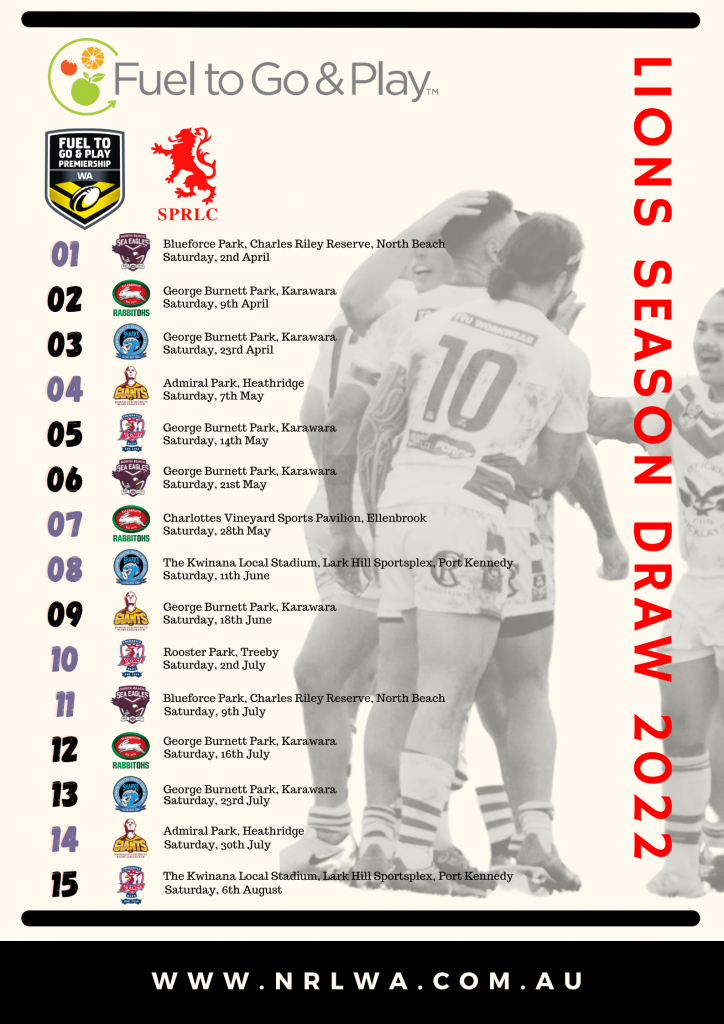 Conclusion
Both of last years grand finalists have tough changes to over come for the new season, especially with big difference in the spine. South Perth have been grooming some players to take the mantle for a couple of years now. Fullbacks and Halves are the highest paid players in the NRL for a reason, and finding quality ones are tough, but I still expect the Lions forwards to make them a tough assignment for any team.