Blueforce Cup – With Over 70 Years Of Rivalry

The Lofts Family are staunch North Beach Sea Eagles people. But more than that, they are woven into the fabric of rugby league here in Western Australia.

Not just as players. But volunteers. Giving up their time to support our great sport in a state that doesn’t always get the credit it deserves.

I admit to having a few short worded conversations with Michelle, the matriarch of the family, while I was “regaining my breath” on the wing when playing for opposition sides. Her banter on the sidelines and trademark voice, have been heard at Blueforce Park, Charles Riley Reserve for many a year.

And while they continue to look for ways to give back to the local game, Dale Lofts, as the managing director of Blueforce, continues to throw resources at the game here in Perth. Not for fame or recognition. But for the simple fact that in his words at the end of the day “Rugby League will be the winner”.

Hence a plan was hatched between two arch rivals and long term clubs, North Beach Sea Eagles and South Perth Lions to hold the inaugural Blueforce Cup. A chance for the clubs to show their appreciation to what Blueforce are able to do for grass roots rugby league here in WA.

With Blueforce celebrating their 20th year in existence, and the NRL WA celebrating their 75th year, there is some amazing symmetry in the milestones and we congratulate the Lofts family, Blueforce and both clubs for their longevity and commitment to the greatest game of all.

Get down to Blueforce Park, Charles Riley Reserve, North Beach tomorrow, Saturday 16th July. With the action kicking off at 11:20am, and the main game at 3:30pm, it should be a great day for all involved. 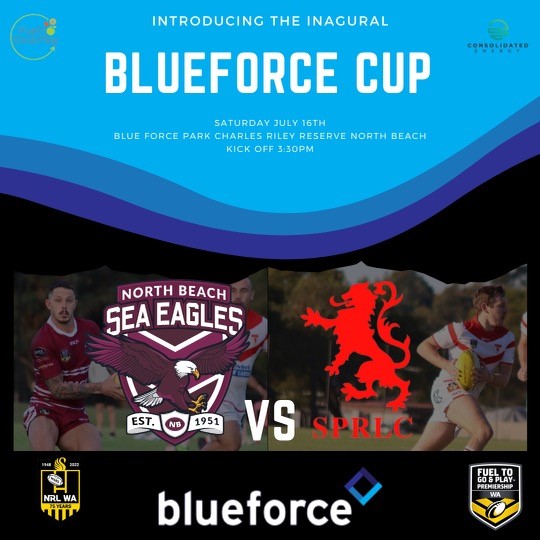