The Ellenbrook Rabbitohs have made it 4 premierships in a row, this time against a brave Joondalup Giants side. The Giants, boasting Women’s Player Of The Year, Valuese Tiakia, fought extremely hard as the underdogs, but were ultimately no match for the machine that is the Ellenbrook Rabbitohs. Boasting 8 new players this year, they simply were too strong for their Joondalup counterparts, who suffered a massive loss before a ball was even kicked, with star player Anneka Stephens being ruled out before kick off.

And it was a brilliant start of the game, with both teams trying to assert themselves with Joondalup relying on their formidable pack. Led by Tiakia, were amazing in the middle of the field. Hard running from the classy Chanelle Edwards and revitalised Kiri Smiler kept the Giants rolling through, with some difficult to manage kicks from Tiakia and Rueben Cherrington making life hard for the Rabbitohs back three.

But a couple of drop balls and some ill discipline off the back of some strong running from Juraea Turner, but the Rabbitohs on the attack for their first real chance seven minutes in. And they didn’t miss. After a strong run from Mahinarangi Clair put the Rabbits dead centre, a good long ball from Paihau Pomare gave captain Kailey Thompson time and space. And with Te Rauhina Wall, who was awarded the player of the grand final, hit an unders line at pace and was too much to handle, going over for the first points of the game. With Thompson adding the extras it was a 6-0 lead to the Rabbitohs.

But the Giants weren’t going to accept defeat meekly in this one. With some monster shots being dished out, Heather Matoe and Hererunga Te Ao dishing out punishment on the edge, and livewire defender Shaniqua Pokere showing up everywhere on the field, could the young brigade from Ellenbrook continue to take this kind of punishment? They rumbled all the way down to the Ellenbrook 20 metre line, and on last tackle Cherrington beat multiple defenders but just couldn’t find a final pass or kick to finish off the set.

But some more errors and ill discipline from the Rabbitohs gave the Giants another chance. Some consecutive high tackles putting the Rabbitohs under more pressure. The introduction of Lana Hawkings looked timely as she injected some energy into the tired legs of the Giants, but a backline move went astray as it wasn’t able to find hands when it looked like they had a 3 on 1 opportunity. With a bit of feeling and some push and shove out there the feeling definitely hadn’t gone out of the game.

But as in all things, there was a change in momentum when the Giants then made a mistake and it was the Rabbitohs turn to apply the pressure. But the Giants stood tall and withstood the barrage from Thompson and Turner and looked to answer right back on the back of another big charge from Tiakia, who was almost the best on ground in a losing side. Special mention has to goto the Giants diminutive fullback Elle Warren and centre Stacey Hendriks, who must have led the hitup count as well in the first half.

At the 20 minute mark, the Giants looked like they might get their reward for their hard work. With the Rabbitohs defence compressed, the Giants tried to look to the outside, when disaster struck. Rabbitohs winger Tiarne Barnett latched onto an errant long ball, and looked home for all money. But Cherrington came from the far side in a brilliant show of speed and determination to deny Barnett, pulling off a try saver 10 metres out from the line. Unfortunately, CJ Waters, the Giants winger, was sent to the sin bin for a late flop after the tackle had been completed and the Joondalup side would have to defend the set with one less player.

Yet again it was Tiakia who stood tall. Producing a one on one strip on the first tackle, she nullified that set and gave the Giants a fighting chance to survive until half time. But the cracks were starting to appear. After a linebreak from Lillee Wearing off a great ball from Turner split the Giants, only the desperate defence again from Cherrington, and an errant ball on the next tackle stopped the Rabbitohs momentum. And the Joondalup side survived yet again.

But the wall finally cracked. Woman of the moment Wall came up with a big a big play. Receiving the ball at halfway, she accelerated in between two defenders and got a beautiful offload away to Thompson, who went straight through, beat the fullback and again was pulled down short of the line by some desperate defence from Tiakia covering from the middle of the field. But this left them short on the other side of the field and some mature play from Turner and Huia Turoa Swannell put Wearing away in the corner and the Rabbitohs took a 10-0 lead into half time.

After the break both teams settled straight back into their rhythm, with the Giants asserting their authority early in the middle of the field, and the Rabbitohs just being extremely tight in defence. And the big hits just kept coming. With Tiana Graham taking some heavy contact, she was escorted from the field in obvious pain. But you just got the feeling that the Giants had to be the next to score if they were going to make a run at this trophy.

With Chanelle Edwards being relentless in the middle of the field, her continual battle with Hineriu Thompson and the rest of the Rabbitohs forward pack was one for the ages. Moments such as Kiri Smiler getting back for kick she had no rights to be there for and Elle Warren taking her 30th hit up for the game were huge. But the Rabbitohs just wouldn’t be denied.

And when the Giants dropped the ball ni the 9th minute of the second half the pressure again told. With Juraea Turner pulling the strings, she set up a great right shift, to Ariana Ruru-Hinaki, who wasted no time to get Azhure Turner one on one. And Azhure made no mistake. Coming of her right foot, she left her opposite winger standing still and was too fast for the cover defence as she dove into the corner as she put the Rabbitohs 14-0 in front in what looked an unassailable lead.

After a few scrappy minutes from both sides, the game seemed a bit on a knifes edge on who would take advantage of the lull. And up stepped Kailey Thompson to put her stamp on the game, and one hand on the trophy for the Rabbitohs. Receiving the ball 40 metres out from the line, she broke a tackle and made 3 others look like they were standing still as she sliced through the line. Sizing up the fullback one on one, she put on the big right foot step and was too fast for the cover defence to score next to the post. Leading 20-0 it seemed like it was going to be a bridge too far now for the Giants.

In what was an epic performance from the outside backs from Ellenbrook, unheralded centre Bobbie-Lee Barker was a defensive rock. Weighing 20 kilos ringing wet, she was a constant thorn in the Giants side without the ball, and along with Ruru-Hinaki, was always trying to work the ball out of trouble, especially while the forwards were going to war in the middle of the field.

With time running down, another big run from Edwards and following offload, put the Giants deep into Ellenbrook territory. Two tackles later, it was Edwards again in the thick of things, running at four Rabbitohs defenders and being stopped a metre short. And when Lana Hawkings went low from the play the ball, it looked like the Giant might have gotten on the score sheet. But desperate defence from Graham, Pomare and Ruru-Hinaki showed the Rabbitohs were not going to just let this try in because the game was done. Both sides were going to put in till the final siren.

With both sides still looking to fire up, a couple of classy plays from both teams finished the game in style. With less than a minute on the clock, an amazing chip and regather by Tiakia, was followed by a quick offload to her winger Jess Crear, who scooted downfield. And in the same play fullback Ariana Ruru-Hinaki made the tackle, and then recovered to dive on the loose ball before anyone else could react. Amazing play from both sides. 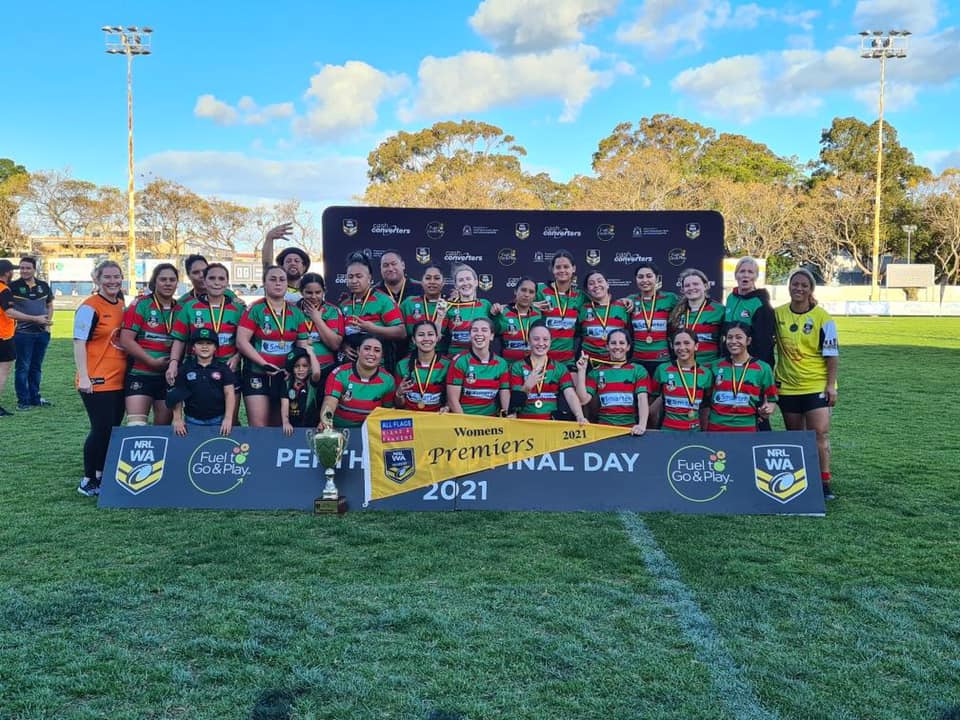