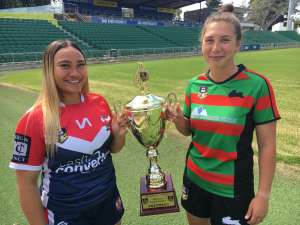 The Ellenbrook Rabbitohs will look to claim back-to-back Women’s Premiership titles when they take on the Fremantle Roosters at Dorrien Gardens on Saturday.

After topping the regular season standings with eight wins and a draw from their nine games, the Rabbitohs will take on a Roosters side competing in their first year in the tackle competition.

Buoyed by a dominant 26-4 win over the Joondalup Giants during last weekend’s Preliminary Final, Fremantle will be confident of causing an upset over an Ellenbrook side who have only played once in the last six weeks due to forfeits and earned byes.

Ellenbrook will be boosted by the return of leading points scorer Kailey Thompson who has recovered from an ankle injury sustained playing for the Rabbitohs’ Women’s League Tag side.

The Rabbitohs owned a league-best attack during the regular season – scoring 366 points whilst conceding just 58, in large part to wingers Huia Swannell and Natahlia Thompson each scoring ten tries.

The Roosters, meanwhile, have had no trouble finding the try line themselves this year, with top try scorer Keisha Marshall (14) and Claudia Foster (10) keen to make their mark on the big stage.

The game will kick off at 3.45pm at Dorrien Gardens.