Perth City rode a dominant team performance on route to claiming their fourth-successive Senior Men’s ANZAC Challenge title with a 24-4 win over Perth Kiwis at Dorrien Gardens on Saturday.

Having earned bragging rights in each of the past three years, City were at it again, as they added another trophy to the cabinet.

Led by a standout performance from fullback Will Smith, City kept the Kiwis’ attack to just one try to set up the win.

“I’ve always played Under 18’s for the City boys,” Player of the Match Smith said.

“To actually have a game with them [Senior Men] and get Man of the Match is a massive honour.”

With an abundance of fresh talent in their ranks, the Kiwis got off to a start strong as they peppered the City goal-line.

City weathered the storm, however, and took the lead against the run of play as Rockingham Sharks centre Logan Barclay touched down under the sticks after just seven minutes.

That’s how it would stay until just before the break when Eddie Proudler turned provider for Trent Trotter who scored to double City’s advantage.

Sensing a potential four-peat, City started the second half with a fire in the belly – Adam Roy crossing for his side’s third try just two minutes after the restart.

With their tails up, City’s Jarrad Smith crashed over from close range to extend his team’s lead before Kiwi captain Delane Edwards got his side on the board quarter of an hour from time.

The reigning Ken Allen Medal winner’s try was the only shining point for the Kiwis, however, as City claimed an emphatic win.

A late Kade McDonald penalty goal put City up by four scores and put the result beyond doubt.

Players from both sides will now turn their focus towards Round 1 of the WA Smarter Than Smoking Premiership that kicks off next Saturday, 4 May.

Player of the Match: Will Smith (Perth City) 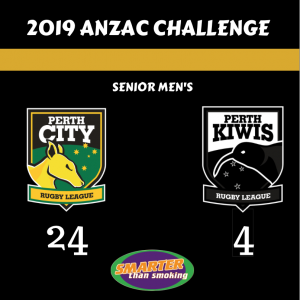