Joseph scores after the siren to keep Ellenbrook alive 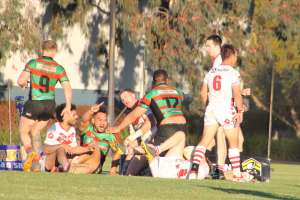 Nga Joseph celebrates getting the ball down in the corner to win the game for Ellenbrook
Credit: Carmel Potter-Green

Nga Joseph scored a try after the siren to hand the Ellenbrook Rabbitohs a dramatic 26-22 win over the South Perth Lions to keep their WA Smarter Than Smoking Premiership season alive.

Trailing by two points and with the siren already sounded, the Rabbitohs kept the ball alive before Joseph touched down in the corner in a stunning end to the game.

“Credit to the team – I was just lucky to be in the right place at the right time.

“We have faith in how we play and faith in each other.”

With their season on the line, Ellenbrook raced out to an early 10-0 lead as Fernando Ekeroma and Jesse Rihari both scored inside the opening 27 minutes. 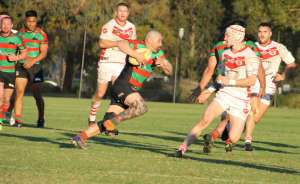 Ekeroma then turned villain on the half-hour mark as his knock on allowed Kade McDonald to scoot over for the Lions.

Harry Debique added the extras as the hosts took a 10-6 deficit into half-time.

Whatever was said in the sheds by the Lions coaching staff had the desired effect as Isaac Thomas darted out of dummy half to give his side their first lead of the game just eight minutes after the restart.

With all the momentum behind them, South Perth seized control of the game as further tries to Debique and Connor Hudson gave the hosts a 22-10 lead with 25 minutes to play. 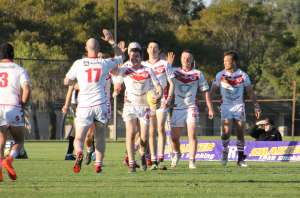 Playing in their first year in the competition, Ellenbrook weren’t about to back down, however, and soon hit back as the ever-impressive River Colman found a gap in the South Perth defence before streaking away to score on the hour-mark.

Down by just a converted try, the Rabbitohs knew they needed more and got it courtesy of Rihari’s second of the game nine minutes from time.

Five-eight Jaylen Grey had the chance to level the scores but pushed his conversion attempt wide.

The scoring wasn’t done there, however.

In dramatic circumstances, with the siren already sounded, a sin-binning to Lions forward Taine Kingi left his side short in defence as the Rabbitohs kept the ball alive before Joseph dotted down in the corner to cap off a remarkable end to the game and keep Ellenbrook’s season alive.

In other results around the grounds, the Fremantle Roosters secured a top-two finish with a 58-22 win over the Joondalup Giants, while the Rockingham Sharks made it four Premiership wins in a row with an 86-4 victory over the Willagee Bears.