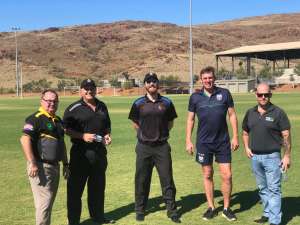 Preparation is underway ahead of the 2020 Junior State Championships in Karratha.
Credit: Karratha Junior Rugby League

Rolle, alongside partners NRL WA and The City of Karratha have begun work ahead of next April’s Championships as rugby league continues to expand across the state.

“We’re doing a lot of the strategic planning this week and having some good meetings with the City of Karratha and Karratha Leisureplex,” Rolle said.

“We had our most successful showing at Junior State Championships this year and we’re currently planning the North-West Reds Championships which are happening in Broome.”

“From there, we will select the team that will play in the Junior State Championships in 2020.”

Rolle says establishing a positive environment has been key in the game’s growth.

“We like to keep progressing forward and a lot of our club-based stuff is about inclusiveness,” Rolle said.

“I think that’s part of why it’s becoming so attractive for kids to give rugby league a try.

“We’ve got a really strong mini-mod area which is good for the game.” 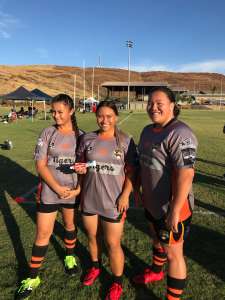 “Cherysh has set a great example for the girl’s game up here and showing young women they have direction in the game,” Rolle said.

Rolle also praised the role the City of Karratha played in helping secure hosting rights to the Championships.

“Thanks to the City of Karratha in their support bringing this event to the region and making sure it’s a success,” Rolle said.

“Their role is going to be massive.

“They’ve shown great support towards NRL WA and Karratha Junior Rugby League in making sure everything will be ready to facilitate the event.

“We’ve grown some really strong relationships together and we’ll be continuing to develop them over the next ten months together.”

City of Karratha Manager of Recreation Facilities, Tony Wear says the Championships mark the start of an exciting time for the region.

“It’s massive for us – it’s a great opportunity for us to showcase our town.”

Wear says he is delighted to see rugby league take off in Karratha.

“Some of our juniors are really coming through the ranks and showing great promise – it’ll be great to expose them to this level of competition,” Wear said.

“Junior Rugby League has gone from very small and with the building of the Karratha Leisureplex, it’s absolutely booming.

“We’ve now got the facilities to showcase and attract these events.

“All of the junior sports up here are thriving in Karratha at the moment.”

Plans between Karratha Junior Rugby League Club, NRL WA and the City of Karratha will continue to take place in the coming months ahead of the Junior State Championships which will be held in April 2020.