Kainoa Gudgeon of the Joondalup Giants is the winner of the Ken Allen Medal in 2020.

Images Thanks to Total Sports Photography

In a revamped Ken Allen Awards ceremony in 2020, Gudgeon did enough in the final round of the season to leapfrog Andrew Jeffrey of the Rockingham Sharks and secure the medal. Jeffrey, who had an amazing season and led the Sharks from 4th to a heart stopping grand final loss, was effusive in his praise for Gudgeon while also acknowledging how close he came the NRL WA’s biggest prize. 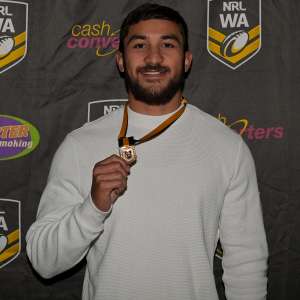 Kainoa, who is WA through and through, was a South-West Warriors junior initially before calling the South Perth Lions home in the junior age groups. A graduate of the Cash Converters West Coast Pirates program here in Western Australia, Kainoa then took his talents over east with the Newcastle Knights and the Central Queensland Capras in the Toyota Cup 20s and QLD Cup competitions.

An electric fullback, Gudgeon was a big part of why the Giants were so successful this season, with dominant try scoring performances. Probably the most dangerous open field player in the competition this season, he was a nightmare for teams when bringing the ball back, with his willingness to attack from any position on the field a constant threat.

The award ceremony kicked off at the Matilda Bay Restaurant, with an acknowledgement from ARLC WA Chairman Mr Bob Cronin AM and NRL WA General Manager John Sackson, acknowledging and thanking the sponsors, clubs, volunteers and game development for their dedication and support in an unprecedented year, with the successful completion of the Smarter Than Smoking Competition.

The awards began with young Caylee Wallis taking out the All Flags Signs And Banners Women’s League Tag player of the year. While young, Caylee has long been involved in the Rugby League community through her family, and this season was a senior figure in the South Perth Lions push to the grand final. Smart, quick off the mark, and with a great feel for the game, Wallis was a worthy and loved recipient of the award this year. Heading off to Wagga Wagga, having been accepted into the defence forces, she will be a massive hole in the Lions side next year.

Quickly moving onto the Val Murphy Trophy’s best player, and it was a former Ken Allen Medallist in Deba Cook who saluted. Part of the North Beach Sea Eagles victorious side, Deba completed a rare treble in which he won the premiership, the Wally Stein trophy for player of the grand final, and now the best player in the competition. A devastating running five-eight, or stand-off in the old language, Deba was incredibly humble in his acceptance, and admitted to this writer that he loves just being able to work in town and play the game that he loves. He would play forever if he could. 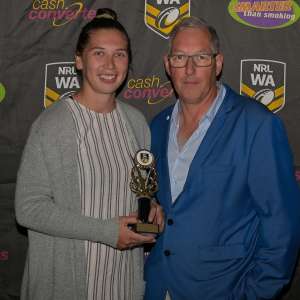 The All Flags Signs And Banners Women’s Premiership Best Player went to none other than Ellenbrook Rabbitohs stalwart Kailey Thompson. A tough year at the Rabbitohs, it was a just reward for Thompson, who was a constant menace to players and referee’s alike. Knowledgeable, wily with a great kicking game, it is was a result of hard work for Kailey, who continues to strive for the female game, in juniors and seniors in Western Australia. She was well spoken in her speech, admiring the pathways that were there for the girls and ladies of this state, and hopeful of a better 2021 for everyone involved.

Without great volunteers we wouldn’t have a game, and rightfully there were some fantastic servants who were recognised. Mike MacKenzie, from the Mandurah Storm, was recognised for his above and beyond attitude. Even though living in one of the furthest clubs from the Perth Metro area, Mike constantly made himself available on Friday nights as a sports trainer for the ladies games, as well as always committing to helping NRL WA big events. The female volunteer of the year went to the hard working no-nonsense Rebecca Foster of the Kalamunda Bulldogs. Deserving of a medal for putting up with her partner Adrian day after day, as he admitted of his own accord on the night, she has worked tirelessly to lay the foundation for the hopeful return of the Bulldogs as a junior and senior force in our competition after some trying years for the nomadic club. 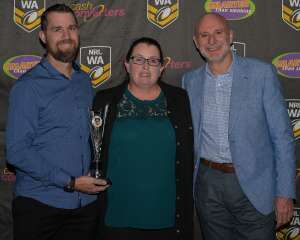 Finally a new award was given to recognise a special family in our competition, and the Volunteer Family of the year went to the hardworking McMillan’s of the Rockingham Sharks. Self-confessed rugby league tragics, Brett and Jo are constant faces at Junior events. Taking on the Sharks and South West Dolphins roles with aplomb, they are the definition of good hard-working people and we hope they will be involved for many years to come.

The Player’s Player trophies were up next. Now while the other best and fairest awards are tallied by referee votes for each game, The players player trophies are conducted by a private vote sent out to players from each club in the Smarter Smoking Premiership and Women’s Tackle Premiership. Players are asked to vote for a 3-2-1 system, with the only rule being that they must vote for players who are not in their team.

In the Women’s Premiership, it was surprise newcomer Katerina Horner who dominated the vote, with an astonishing 32% of the overall count. When you consider that a someone receiving 3 votes from all her peers would be 48%, it is an amazing feat. Playing in her first ever year of rugby league, she decimated opposition defences with her great leg speed and footwork. A fantastic addition to the Fremantle Roosters, they will be hoping she continues to play on in 2021.

In the Men’s Premiership, Kainoa took out the Players Player double. An incredibly close vote, Kainoa again pipped out a Rockingham Shark for the big honours. Julian Wilson Wylie, who at times carried the Sharks this season, pushed Kainoa with 34 votes, but couldn’t bridge the deficit with Kainoa finishing on 36 and holding on for the victory.

The Joondalup Giants President Andrew Kelly was up on stage next to receive the Senior Club Champions. A big year for the club, with its first premiership in 20 years, “Johnsy” couldn’t keep a smile off his face during his interview. And although it was a bitter year for the South Perth Lions, who lost all 6 Grand Finals that they contested, President Bruce Greenwood received the Smarter Than Smoking Club Championship on behalf of the club. A huge achievement, as it encompasses Junior and Senior grades, the Lions will be back better than ever next year.

As discussed, the great night ended with a last round finish in the voting, with Kainoa receiving the maximum 3 votes in the final round, to move into top position and take home the coveted award. A worthy winner and a great ambassador for our game here in Western Australia. As MC James “Sully” Sullivan would say. We definitely play rugby league here in the West. 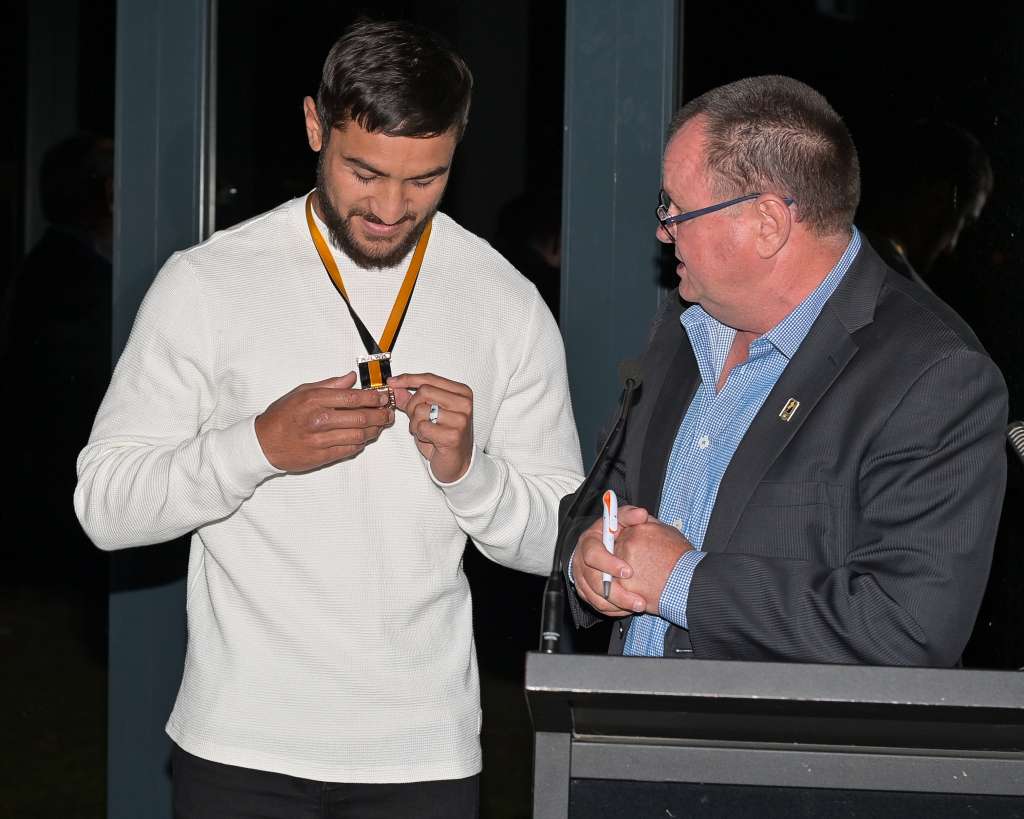 Panna Panthers are Back in 2021

Join the Pannawonica Panthers Rugby League team as they are back for 2021. Our mission is to provide a fun […]