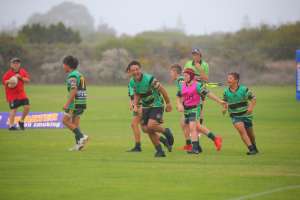 Malakai Letufuga’s try 10 seconds from time helped guide the Northern Fusion to a second-straight U12’s State title – defeating the Southern Pride 18-16 on the final day of the 2019 Junior State Championships.

Trailing 14-16 heading into the final play of the game, the Fusion kept the ball alive before Letufuga crashed over in the corner for his second of the game, and ultimately, the match-winner.

After finishing top of the standings after pool action and having already recorded a 28-10 win over the Fusion earlier in the tournament, Pride came into the contest as slight favourites.

Relishing the ‘underdog’ tag, it was the Fusion who burst out the blocks the quickest, however – forward Haylen Pokare dotting down in the left corner to give his side a 4-0 lead inside five minutes.

Desperate to be the next to score, Pride did just that and found themselves back in the contest when Heath Tuhakaraina wriggled his way over.

The game then flipped on its head just before the half-time break as Pride captain Gabriel Salelea danced his way over the try line before adding the extras himself to hand his side a 10-8 lead heading into the sheds.

In a see-saw contest, Fusion regained their lead just six minutes after the restart as winger Seth Kramme made it a hat-trick of tries in the left corner.

Not to be outdone, Pride’s Ty Paton put his side back in control of the contest with a four-pointer, and when Sam Walsh added the extras it looked to be a long way back for the Fusion.

Driven by their desire for back-to-back titles, the Fusion kicked up a gear in the final stanza and got their reward just before the full-time siren as Letufuga claimed his double and the State bragging rights with a well-crafted try in the corner. 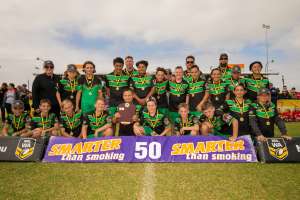