Lions cling on to down Giants 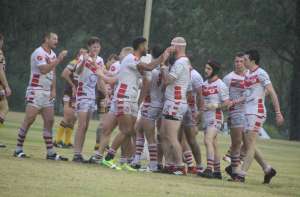 The South Perth Lions celebrate picking up their third win of the season in wet conditions
Credit: Carmel Potter-Green

Tim Noble scored a pair of tries while Kade McDonald also played a starring role as the South Perth Lions held off a fast-finishing Joondalup Giants 36-32 in Round Six of the WA Smarter Than Smoking Premiership at George Burnett Park on Saturday.

Leading 36-20 with ten minutes to play, the Lions were left to hold their breath as the Giants scored a pair of late tries in a dramatic finish to the game.

“The boys know how to kill a coach – we go 16 points up with ten minutes to go and the guys give them a sniff again,” South Perth coach Isaac Thomas said.

Playing without WA State trio Eddie Proudler, Jarrad Smith and Will Smith who were away at the Combined Affiliated States Championships, the Lions showed off their depth as they collected their third win of the season.

“The guys we called in did a job for us,” Thomas said.

“We’ve got some good depth here and we’re completely confident in their abilities.”

In wet and windy conditions, it was Joondalup who got off to the perfect start as halfback Caleb Reedy produced a 40/20 within the opening sixty seconds of play before setting up skipper Daniel Sneddon who crashed over for the first points of the game.

Having suffered a 44-30 loss at the hands of the Fremantle Roosters last weekend, South Perth soon responded as McDonald produced a bit of individual brilliance – streaking 60 metres before teeing up his winger Josh Anstis who touched down under the sticks.

The teams then traded tries as Noble scored his first of the game to give the Lions the lead before Giants dummy half Te Wheoro Jones capitalised on Connor Hudson being offside from the resulting kick-off to cross.

Hudson turned from villain to hero just moments later, however, as he latched onto Harry Debique’s cross-field kick to touch down after half-an-hour. 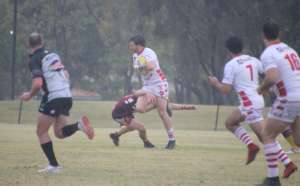 Holding an eight-point lead, the Lions dropped their guard either side of the break allowing Kukutai Jones to cross on the stroke of half-time before Reedy reclaimed the Giants’ lead four minutes after the restart with a splitting run through the South Perth defence.

Up 20-18, Joondalup were dealt a blow when Te Wheoro Jones was sent to the bin for a professional foul.

The sin-binning would prove costly for the Giants as the Lions piled on 18 unanswered points to take a 36-20 lead into the final quarter of an hour.

Despite a couple of late tries from Sneddon and Reedy, South Perth held on to remain inside the top four.

In the competition’s other game, the Fremantle Roosters edged the Ellenbrook Rabbitohs 16-14 in a nail-biter at Charlottes Pavilion.