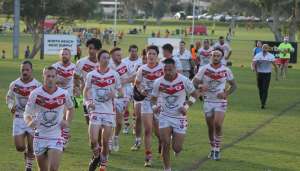 After winning their last four games, the South Perth Lions find themselves within touching distance of the WA Smarter Than Smoking Premiership summit.

The Lions sit third on the ladder, just one game behind the North Beach Sea Eagles and Fremantle Roosters, and Coach Hayden Fisher hopes his side can keep up their momentum when they travel to Joondalup to take on the Giants on Saturday.

“The whole club has been going on quite strongly,” he said.

“We’re really happy with the direction we’re heading. We’re getting better and better.”

The Giants are sliding in the opposite direction, however, having lost their past three games, but did record a 30-22 win the last time the sides met in Round Six.

Fisher knows his side cannot be complacent against the fifth-placed Giants.

“I think they (Joondalup) step up against South Perth,” he said.

“We always have a tussle with them and I don’t think they’ll be too down in confidence and will be keen for a win.

“We won’t be taking it easy and hopefully, if we stick to what we’ve been doing the last few weeks, hopefully we can get on top.”

In team news, South Perth will be without Eddie Proudler, Willem Boshoff, Matthew Pewhairangi-Barnfather and Timoti Noble, but welcome back Isaac Thomas and Tyler Thomas who return from South African duty.

“It was a good little test match between Malta and South Africa and in particular Tyler had an outstanding game, so it’ll be good to see if he can bring that form back,” Fisher said.

In the absence of experienced players, The New Zealand-born Coach says he has been impressed with the emergence of young-guns Kade McDonald and Aidan Carstairs.

“It’s exciting to see there are guys of that age group that are at the calibre and I think it looks good for the club moving forward in the next couple of years,” he said.

Meanwhile, the Giants will be boosted by the return of West Coast Pirates captain Ollie Callan.

In other games around the ground, the Willagee Bears will look to build on a strong display last week when they travel to take on the ladder-leading North Beach Sea Eagles, while the Fremantle Roosters welcome back centre Taiapa Graham when they host the Rockingham Sharks.

All games kick off at 3.30pm on Saturday and are proudly brought to you by Red Nose – Saving Little Lives.