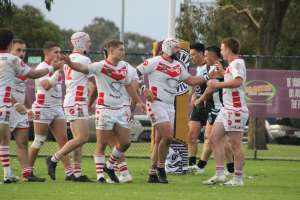 The South Perth Lions claimed their third-straight WA Smarter Than Smoking Premiership win with a 40-10 victory over the Rockingham Sharks at Rockingham Mazda Arena on Saturday.

The Lions scored early and often – piling on seven tries as they solidified third spot on the ladder and extended the Sharks’ home losing streak to three games.

Coming off a hard-fought 36-22 win over the Willagee Bears in Round 7, Rockingham controlled the early tempo as Logan Barclay and Robbie Smith threated the South Perth line.

Despite the Sharks’ positive start, it was the Lions who were the first to score as Eddie Proudler set up Harry Debiuqe who crossed under the sticks.

Proudler turned provider again just five minutes later as he teed up Michael Guthrie who burrowed over from close range to double the visitors’ lead.

Needing a lift, the Sharks hit back as Sean Scott set up forward Heta Apiata who bundled over for his second try of the season.

The joy was short-lived for the hosts as South Perth hit back immediately courtesy of former Shark Brandon Wright before Dylan Estreich added his side’s fourth try on the stroke of half-time as the Lions took a 22-4 lead into the sheds.

South Perth continued their dominance after the restart as Blair Young scooted over just six minutes in.

Playing in front of their home faithful, Rockingham weren’t going to back down without a fight and pulled back a try just before the hour mark thanks to some fancy footwork from halfback Scott.

Late tries to Kiam Fletcher and Debique’s second put the result beyond doubt, however, as the Lions moved just behind second-placed Fremantle Roosters on points differential.

Debique kicked 6/7 conversions from the kicking tee to finish with 20 points.

In the competition’s other game, the Joondalup Giants came from behind to overcome a resolute Willagee Bears 52-22 at Hartfield Park.