Nothing to split ANZAC Senior Women

For the first time in competition history, the Senior Women’s ANZAC Challenge title was shared after Perth City and Perth Kiwis played out a 12-12 draw at Dorrien Gardens on Saturday.

Both sides scored three tries, with neither able to convert any of them as City ended the Kiwis’ two-year dominance of the cup.

Keen to break their ANZAC hoodoo, City burst out of the blocks – Melissa Thomas and Niea Sym touching down inside the opening 10 minutes.

Kiwis winger Natahlia Thompson pulled her side back into the contest with a try just on the stroke of half-time, with sister Kailey unable to add the extras as City took an 8-4 lead into the sheds.

The try clearly gave Thompson an appetite for more as the Ellenbrook Rabbitohs speedster dotted down to tie the contest up at 8-8 with her second of the game.

Playing with her tail up, Thompson almost crossed for her hat-trick but was adjudged to have gone into touch in the act of scoring with 13 minutes left on the clock.

Not to be denied, the Kiwis completed the comeback as Kayla Webb scored in the corner to put her side on the brink of a third-straight title.

Not ones to go down without a fight, City again tied up the game as Azhure Turner finished off a well-polished set-play to score in the corner.

With the clock running down, City’s Xanthey Gray pushed her potential match-winning field goal to the side as the teams were forced to share the ANZAC trophy.

Player of the Match: Melissa Thomas 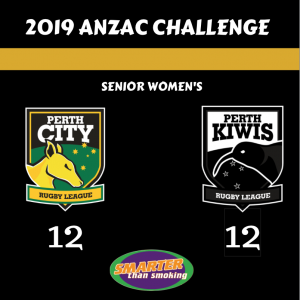