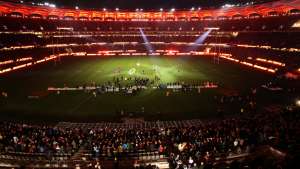 You couldn’t have written a better script if you tried.

Perth’s new state of the art stadium is like something Western Australia has ever seen, and now, it has a new stadium record after 59,721 fans packed in to witness the NSW Blues and Queensland Maroons square off in State of Origin Game II last Sunday.

Despite the weather’s best attempt to deter fans away, the people of WA showed they do in fact have a passion for rugby league – and a great one at that.

On the field, it was the Blues who were dominant – running in six tries to defeat the Maroons 38-6 and level up the best-of-three-game series at 1-1 ahead of the decider in Sydney on July 10.

Forever and a day, this historic game will be remembered for what happened off the field, however, as Perth turned blue and maroon to support rugby league’s pinnacle event.

The game even eclipsed the stadium’s previous record crowd of 59,608 when the West Coast Eagles hosted Melbourne.

For those in the Eastern States, we hope you were watching, because Perth, a historically AFL dominated state, spoke with their feet over the weekend – and their feet are saying they have an appetite for rugby league. 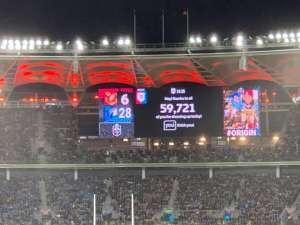