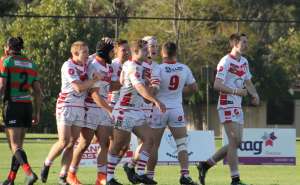 Captain Eddie Proudler played a starring role as the South Perth Lions booked their spot in the 2019 WA Smarter Than Smoking Premiership Preliminary Finals with a 42-14 win over the Ellenbrook Rabbitohs in Saturday’s Elimination Final at George Burnett Park.

Having missed the last six weeks with a broken eye socket, Proudler returned to the fold – scoring a try and producing a player of the match performance to lead the Lions into the second week of the finals.

“I’m just happy to get the win.

“We’ll keep working and move onto next week.”

Playing in front of their home faithful, South Perth got off to the perfect start as back-rower Brandon Wright scored a pair of tries inside the opening 20 minutes to give his side an early 12-0 lead.

The Lions extended their advantage just before the half-hour mark as vice-captain Jarrad Smith carved through the middle of the Ellenbrook defence before rounding fullback Chazz Palmer to touch down. 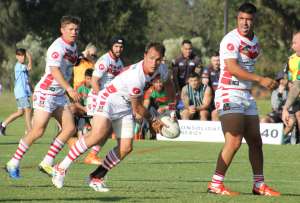 Needing a lift to keep their season alive, Premiership new-boys Ellenbrook got themselves on the scoreboard on the stroke of half-time as captain River Colman found some room before setting up a rampaging Philip Tunupopo who crashed over under the sticks.

Five-eight Jaylen Grey added the extras to reduce the Bunnies’ deficit to 18-6 heading into the sheds.

Buoyed by their try on the stroke of half-time, the Rabbitohs burst out of the blocks after the break as Carlos Waretini set up centre Kade Pearce who scored in the corner.

With their lead now at just eight points, South Perth hit back as Will Smith linked up with former West Coast Pirates teammate Billy Judge who crossed out on the left wing.

In the act of Judge scoring, Rabbitohs five-eight Grey was sent off for a deliberate trip – reducing the visitors to 12-men.

With Ellenbrook also without vice-captain Manasseh Gudgeon who had to leave the game early with a head knock, the Lions took full advantage as Prouder cut through the Rabbitohs’ defence to score on his return and extend his side’s lead to 28-10. 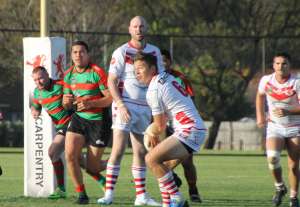 Eddie Proudler scored a try in a Player of the Match performance on his return from an eye socket injury
Credit: Carmel Potter-Green

Despite being a man short, Ellenbrook weren’t about to back down without a fight and responded as Waretini again turned provider for Pearce to score his second of the game on the left edge.

Any hopes of an Ellenbrook miracle were shortly dashed, however, as Kade McDonald scooped up a grubber kick from Chase Watson before sprinting 100 metres to score a remarkable solo try.

A Harry Debique penalty goal further extended South Perth’s lead, before the Kiwi halfback rounded off the scoring with a try seven minutes from time to cap a strong performance from the Lions and secure their spot in the Preliminary Final.

In the Major Semi-Final, the Fremantle Roosters booked their ticket to a third-straight Grand Final with a 28-26 win over the North Beach Sea Eagles.

North Beach will now take on South Perth in the Preliminary Final on Saturday, 7 September at Ken Allen Field.