Rabbitohs keen to get season back on track against Sea Eagles 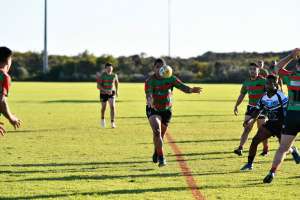 The Ellenbrook Rabbitohs’ first year in the WA Smarter Than Smoking Premiership has brought with it some highs and some lows.

From recording a commanding 54-4 win over the Willagee Bears in their Premiership debut all the way back in Round 2, to giving up a 20-point lead in last weekend’s loss to the Rockingham Sharks (and everything in between), the Rabbitohs’ 2019 season has had it all.

Well, not quite everything if you ask coach Jarek Goebel.

Speaking ahead of his side’s Round 11 clash against the ladder-leading North Beach Sea Eagles, Goebel hopes his side can show some consistency to get their season back on track.

“For a new club, we’re experiencing a lot of things for the first time,” Goebel said.

“We’re just learning – but as long as we don’t make the same mistakes twice.

Ellenbrook own a 3-5 record heading into Round 11, with Goebel aware of the challenge his men face as they host a North Beach side who are yet to taste defeat in 2019.

They’re clinical and that’s the reason they’re at the top,” Goebel said.

“North Beach have won nine in a row, so for us to beat them this week, that’s a big scalp for us and it puts everyone else on notice.” 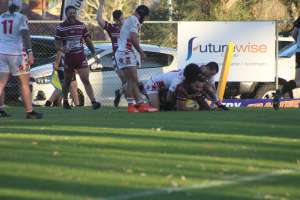 The teams last met in Round 4, with some wayward goal-kicking costing Ellenbrook in a 32-28 loss.

“Beach beat us on the buzzer when we went to North Beach so we’re trying to make that not happen again,” Goebel said.

“I don’t feel like we’re going to play a team that is scary to us, but it’s up to us whether we want to win.”

Currently occupying the last finals spot, the Rabbitohs are in need of a win with the Joondalup Giants and Sharks breathing down their necks.

“You’d be stupid not to keep an eye on Rockingham and Joondalup,” Goebel said.

“But I’ve got to make sure we take care of ourselves.

“We’re sitting fourth equal at the moment and we want to try and jump clear of that so we’re not under the bump at the back end of the season trying to sneak into the top four.”

In team news, Ellenbrook will use their eighth different halves combination of the season with brothers Tyrese and Jaylen Grey stepping in to replace the injured Joseph Simpkins. 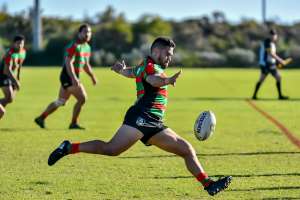 “The brothers are gelling well together,” Goebel said of the young duo.

“We’ve never had the same halves pairing for two games in a row which is why we haven’t been consistent.”

North Beach, meanwhile, go in unchanged from the side who defeated the South Perth Lions last weekend, with fullback Brad Sharpham recovering from an injury scare which pulled him from the field in the second half.

In the competition’s other games, Joondalup host Rockingham in a game with serious finals implications while South Perth host Willagee.

All games will kick-off at 3.30pm on Saturday.