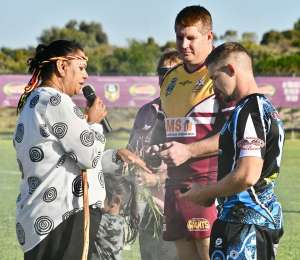 Caleb Reedy played a starring role, scoring a try and assisting three others as the Joondalup Giants defeated the Rockingham Sharks 26-16 during the WA Smarter Than Smoking Premiership’s Indigenous Round on Saturday.

Playing against his former side, Reedy was instrumental as the Giants claimed their second win of the year.

“You know exactly what you’re going to get with Caleb,” coach Gus Marshall said.

“He got us through there today. I’m very happy with how he’s performing.”

Fresh off their first win of the season against the Ellenbrook Rabbitohs, it was the Sharks who were first to hit the scoreboard, however, as fullback Nathan Hill produced a clever chip and chase before offloading to winger Josh Neal who crossed under the sticks after 24 minutes.

Coming off the bye round, the Giants were sluggish in the opening stages, but soon hit back as Reedy linked up with forward Hemi Kani who tied the game up just before the half-hour mark.

The try gave Joondalup the confidence they needed as Reedy again turned provider for winger Rodney Mauga who gave the Giants their first lead of the game heading into the half-time break. 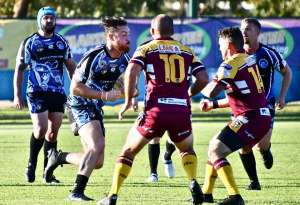 Joondalup’s lead would last just ten minutes as Rockingham burst out of the blocks after the restart – five-eight Robbie Smith scoring his fifth try of the season to tie the game up at 12-12.

The see-saw contest continued as Levi Mitchell skirted out of dummy half to regain the Giants’ lead before Mauga grabbed his second of the game following a cut-out pass from Reedy.

Trailing by eight points and playing without injured halfback Jack Wray, the Sharks needed a lift and found it through centre Logan Barclay who barraged his way across the try line with 13 minutes left on the clock.

With the game on a knife-edge, Reedy stepped up for the Giants – slicing his way through the Sharks’ defence two minutes from time to seal the win for the visitors.

In other results around the grounds, the North Beach Sea Eagles maintained their perfect start to the season with a 32-28 win over the Ellenbrook Rabbitohs while the South Perth Lions returned to winning ways, downing the Willagee Bears 50-6.