On Thursday the 4th of November, the finals of our NRL WA Fuel to Go & Play  High School Cup competitions were played at NRL WA Training & Education Centre at Thomas Oval, Medina.

Year 8, Year 9 and Year 10 finals were contested for the Fuel To Go & Play Schools Competitions, with the might of the Rockingham Senior High School taking on the always strong Atwell College in all the games.

Also for the first time ever, thanks to NRL WA Media Partner Local Media Services Company, all the grand finals were streamed live on YouTube, so that those unable to make the game could watch the fixtures live. In a first for schoolboy rugby league in Western Australia, a large portion of the competition was made available live, thanks to Dave McRae and his team. 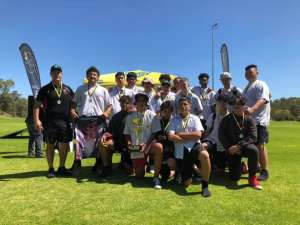 In the Year 8 fixture, bookend Kayne Poko lead an inspired Rockingham Senior High School to a comprehensive 30-6 victory against an ultimately outclassed Atwell College side. On the back of a big performance from their forwards, the Rockingham side controlled the contest from the beginning of the game with big runs from Poko, standout Majah Peachey, Weylan Antonelli and Darcey Gane. With half Tahupotiki Awhiu-Kerei reveling in all the free space and time, they put the sword to the gutsy Atwell side. For Atwell, classy half Ricco Lilii tried incredibly hard, along with relative unknown Carrick Sutherland who ended up in almost everything and front rower Ruan Oliver, who never stopped trying. 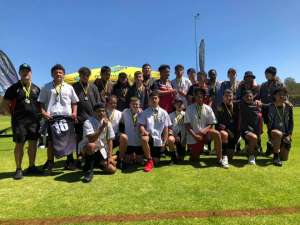 Moving onto the Year 9 fixture, it was a similar story, this time with player of the game Majah Peachey using his speed and strength to dominate the fixture. With the imposing Stacie Reweti, Rihare TeRauna and Nikau Hepi in their lineup, they were just a case of too big and too strong for the Atwell College side. Featuring classy halves Landyn Johnson and Te Auturoa Awhitu-Kerei leading the side around, they were a class above as they ran out 38-16 winners. Although Atwell never went away in the contest and late on showed that if they got enough ball they could definitely do damage. The diminutive Vann Jager lost no fans as he continue to play well above his weight, with Fabian Leituala and Lincoln Kemp showing their worth in the lopsided contest. Kemp in particular was a incredible leader, playing the full fixture and topping both the run and tackle count for the Atwell side. 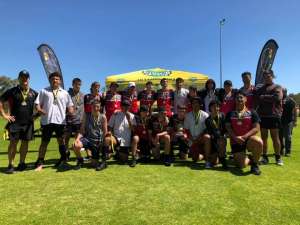 And finally the Year 10 fixture was upon us, and in a back and forth affair where the momentum swung at different times, Rockingham Senior High School completed the treble when they outlasted the Atwell College side, winning 26-10. Rockingham kicked out to an early lead, but a period of sustained pressure from a committed Atwell side had the game in the balance for a long period, before the RSHS finished with a late long range try. Young hooker Shae Trower was player of the grand final, with a super honest and directive performance. Supported well by five-eight Tom Leeder and dangerous centre Quintin Reichardt, they simply had too much in the tank for the Atwell side. Atwell were superbly led by another diminutive playmaker in Tevita Alatini, who continued to poke and probe and cause problems for the Rockingham defence. A big game from Leituala again and he was ably supported by Dylan Bloomer, who was another tyro involved in everything.