Roosters down Lions in try-fest 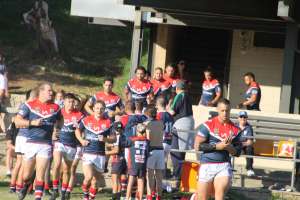 The Fremantle Roosters made it three wins in a row with a 44-30 victory over the South Perth Lions on Saturday
Credit: Carmel Potter-Green

The Fremantle Roosters’ attacking prowess was on full show as they ran in eight team tries in a strong 44-30 win over the South Perth Lions in Round 5 of the WA Smarter Than Smoking Premiership at Ken Allen Field on Saturday.

The Roosters scored early and often, including five tries before half-time to record their third win in a row to remain second on the ladder.

“That’s our style of football. Teams expect us to be all out,” Fremantle captain Delane Edwards said.

“We held on when it mattered most in that last ten minutes.”

Fresh off the bye round, the Roosters burst out of the blocks as debutant Kallin Tereu and winger Alan Cowen both crossed for tries within the opening 10 minutes.

Despite being thoroughly outplayed during the opening stanza of the game, South Perth found a way back into the contest when Brandon Wright regathered a loose ball as the Fremantle defence switched off after thinking Connor Hudson had knocked the ball on in mid-field.

Harry Debique knocked over the extras to bring the Lions within four points at 10-6.

South Perth’s joy was short-lived, however, as a Will Smith knock-on from the resulting kick-off presented Fremantle with strong field position and the reigning premiers took full advantage as Cassius Read crossed for a four-pointer.

Playing with complete and utter confidence, the Roosters piled on another couple of tries courtesy of Tarin Katu and Blake Hignett to put themselves up by 20 points just past the half-hour mark.

Coming into this fixture off the back of a 50-6 win over the Willagee Bears last weekend, the Lions weren’t going to go down without a fight as Wright again broke through the Roosters’ defence before teeing up teammate Eddie Proudler who dotted down under the sticks.

A late Bjorn Crotty penalty on the stroke of half-time gave the hosts a commanding 16-point lead heading into the sheds. 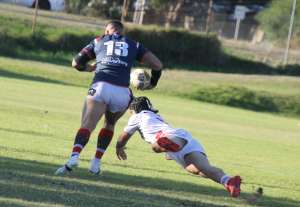 Bjorn Crotty put in a Player of the Match performance
Credit: Carmel Potter-Green

Just as they did in the first half, the Roosters burst out of the blocks after the restart – as Duane Butler and Cowan each touched down within the opening four minutes of the second term.

With a 26-point lead, Fremantle let their foot off the gas as South Perth added some credibility to the scoreline thanks to tries from Blair Young, Proudler and Tim Noble, but it was too little, too late as Roosters skipper Edwards made sure of the result with a try just before the siren.

“Our second half was quite strong so hopefully we can use that as a bit of momentum going into future games.”

In other games around the grounds, the North Beach Sea Eagles made it five wins in a row after downing the Rockingham Sharks 48-32 while the Ellenbrook Rabbitohs returned to winning ways, defeating the Joondalup Giants 30-10.