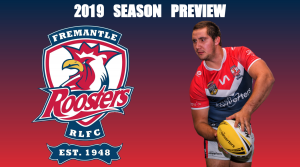 Fremantle Roosters Manager Zac Speir says his side have their eyes on a three-peat of WA Smarter Than Smoking Premiership titles when they get their 2019 campaign underway against the North Beach Sea Eagles on Saturday.

The Roosters hit form at just the right point of the season last year – blowing out the Sea Eagles 32-10 in the Grand Final to become the first WA team to go back-to-back since North Beach in 2012/2013.

Not ones to rest on their laurels, Speir is hoping for a repeat performance from his team this year.

“It’s good to be part of Fremantle again and a three-peat is something that is on the cards for this season,” Speir said.

“We’ll go into this season starting from scratch and looking forward to the ultimate goal of winning another Premiership.”

Boosted by the arrivals of Ezra Taomia and Misiali Pomale, the Roosters may have got stronger in 2019, but Speir isn’t getting carried away.

“It’s good to have another club in the competition this year – Ellenbrook look pretty strong,” the Kiwi-born Manager said.

“I have no doubt Jarek’s [Goebel] got them under the thumb and they’ll be alright.” 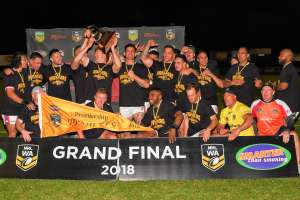 The team will again be led by Ken Allen Medal winner Delane Edwards, while the ever-reliable core of Duane Butler, Alan Cowan and Bjorn Crotty return for another season in blue and red.

“We’ve got a pretty good side this year and have been working hard,” Crotty said.

“I don’t see the point in fixing something that’s not broken – I think we’ll play the same style again.”

The Roosters owned the competition’s most potent attack in 2018 – scoring a decade-high 766 points at an average of over 40 points per contest, with the reigning champions confident they’ll find the try-line again in 2019.

“Hopefully we can repeat that this year.”

Fremantle get their season underway with a Grand Final rematch against North Beach this Saturday, May 4, before hitting the road to take on the Rockingham Sharks in Round 2.