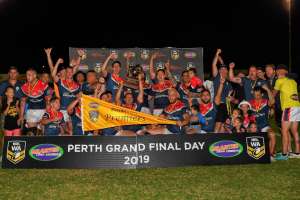 The Fremantle Roosters secured a three-peat of WA Smarter Than Smoking Premiership titles with a convincing 26-6 win over the North Beach Sea Eagles at Dorrien Gardens on Saturday.

In a rematch of last year’s Grand Final, the Roosters produced yet another masterclass – scoring five tries to back up last season’s win.

“It’s a great thing – it’s something that we worked towards,” Fremantle Manager Zac Speir said.

“It was a strong battle, but we were strong enough to come away in the end.”

Just 12 months after recording a comprehensive 32-6 win over North Beach at the same venue, Fremantle got off to another strong start – Takaroha Peneha opening the scoring with a try after five minutes. 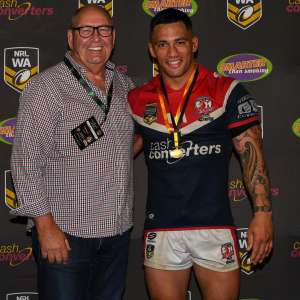 In a battle of the competition’s two standout teams, the Roosters soon extended their advantage as Bjorn Crotty’s cross-field kick was gathered by centre Tarin Katu who in turn found winger Cameron Ruperera who dotted down in the corner.

Only some desperate goal-line defence from Greg Lingard kept Fremantle’s Manihera Eden from inflicting further damage to the scoreboard in a strong opening 20 minutes for the premiers.

Desperate for their season not to end in disappointment, the minor premiership-winning Sea Eagles hit back on the stroke of half-time as Bow Stein crashed over from close range after a flat pass from dummy half Trent Trotter.

With their lead cut to just four points, the Roosters jumped out of the blocks to start the second half as Duane Butler raced 80 metres straight from the kick-off to score a dazzling solo try.

Leading 14-6, a pair of Crotty penalty goals further extended the Roosters’ lead before player-coach Delane Edwards celebrated his birthday in style with a try just past the hour-mark.

The try was the dagger blow which killed off any chance of a North Beach comeback as Rupapera capped off the scoring with his second of the game after some solid build-up play from Katu.

The retiring Tane Peakman missed the sideline conversion, but it was academic as Fremantle clinched their third-straight Premiership trophy.