Roosters to bring games to Perth for next three years 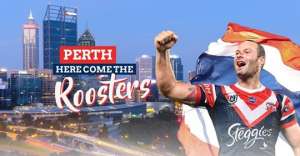 If last month’s announcement that the Canterbury-Bankstown Bulldogs would be bringing games to Perth’s HBF Park for the next three years wasn’t enough for WA rugby league fans, then this next bit of news will be music to your ears with the Sydney Roosters following suit in bringing three home games out West between 2020-2022.

Following the striking of a deal between the Roosters and the Western Australian Government, Perth will now host two NRL fixtures a year for the next three seasons.

“The Sydney Roosters are excited to be bringing Rugby League back to Western Australia and HBF Park for the next three seasons,” he said.

“The Roosters have a strong following in Western Australia and we are pleased to have the opportunity to expand the Sydney Roosters brand across the Country.

“It will also be a great opportunity for our Western Australian Members to watch our team play live in their home state and for those who are avid Sydney Roosters fans to join as Members.

“Following the success of State of Origin this year, the appetite for Rugby League in WA has never been stronger.”

The games will also mark the first time the reigning premiers will travel to Perth to play an NRL fixture. 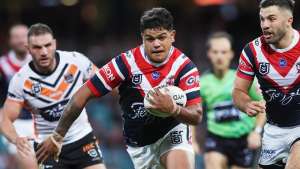 Latrell Mitchell, James Tedesco and the Sydney Roosters will make their first trip to Perth next year

“We are delighted to bring even more quality rugby league to Western Australia, with the legendary Sydney Roosters set to make WA their home away from home for the next three years,” Kelly said.

“Local rugby league continues to go from strength to strength in Western Australia, and this will be a terrific opportunity for local fans to see some of the best of the best, in the flesh right here in Perth.”

The dates of the games will be confirmed at a later date.