The Fremantle Roosters overcame a courageous and spirited effort from the home town team to take out the Southern Ports Great Southern Nine’s stage in Albany over the weekend.

A fantastic weekend, sponsored by Southern Ports, the tournament featured 5 teams and allowed for some good fast paced rugby league which was played in great spirits and lots of smiles around the day. 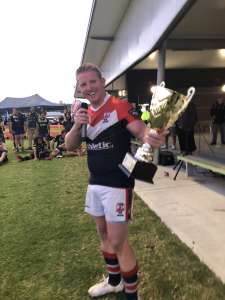 Fremantle Roosters and Rockingham Sharks took some premiership experienced sides down and were expected to dominate the contest, but played the game in great spirit, throwing the ball around with abandon at times, while Mandurah Storm earned some admirers with their plucky brand of football. Lots of banter back and forth between the established sides led to great contests throughout.

Serpentine Jarrahdale Serpents also got their first taste of senior football, and earned two draws on the back of some brilliant play from Rangitukia Teirney and Ace Maki who combined brilliantly.

But the story of the day went to the Albany Sea Dragons, who earned their way through to the finals from fourth place. Early in the day they seemed to play very tight and nervous, and came back in the afternoon and seemed to have more fun with it, and it showed on the field with a great free flowing style.

Unfortunately the final was a bridge too far for the brave home town team, as Fremantle was too classy in the final, winning the contest 30-8 and sealing an undefeated tournament for the Roosters faithful.

A team of the tournament was selected, with the below players from each club featuring in the side.

Panna Panthers are Back in 2021

Join the Pannawonica Panthers Rugby League team as they are back for 2021. Our mission is to provide a fun […]