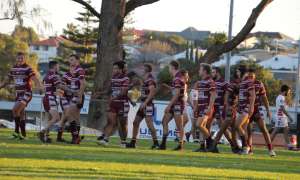 The North Beach Sea Eagles created a slice of WA Smarter Than Smoking Premiership history on Saturday, becoming the first team this decade to win their first nine games of a season after defeating the South Perth Lions 38-18 at Blueforce Park.

The Sea Eagles ran in eight team tries – including two from forward and Man of the Match Josh Benjamin to improve their season record to an impressive 9-0.

“It means everything to the boys – you can see how proud they are when they pull on the jersey.”

Looking to better the Lions’ own record of eight-straight wins to start a season in 2014, the Sea Eagles got off to the perfect start as winger Dustin Hume crossed for the game’s first try after just three minutes.

Winners of their last three games, South Perth came into the contest as one of the form teams in the competition and hit back immediately as five-eight Kade McDonald produced some fancy footwork to dance his way over from close range. 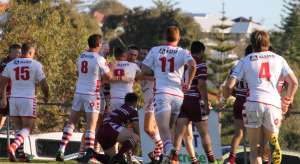 North Beach have made a name for themselves as the competition benchmark and found themselves back on top shortly after as Trent Trotter set up Cairo Takarangi in a fast-paced start.

Trotter turned provider again on a pair of occasions as he linked up with halfback Jeremy Wallace to allow Brad Sharpham to score in the corner before teeing up Bow Stein who slammed down to give the hosts a 20-6 lead.

Only some desperate goal-line defence from Brandon Wright and Josh Anstis prevented Takarangi from further extending North Beach’s lead as John Hough’s men took a commanding lead into the sheds.

Tye Saus’ dazzling 70-metre solo try gave the Sea Eagles an ideal start to the second half as the ladder-leaders started to sense history was about to be re-written.

South Perth weren’t going to back down without a fight, however, with Blair Young sending Daniel Green crashing over to bring the visitors within two converted tries on the hour-mark.

Just as the Lions started to look like they could force themselves back into the contest, the Sea Eagles swooped as Benjamin crossed for a four-minute double to put the result beyond doubt.

A late Jarrad Smith consolation try did little to lift South Perth’s spirits as North Beach dummy half Trotter got the final laugh with a score on the siren.

In the competition’s other results, the Rockingham Sharks came from 24-points down to defeat the Ellenbrook Rabbitohs 36-34 while the Fremantle Roosters flexed their attacking muscles in a 90-4 win over the Willagee Bears.