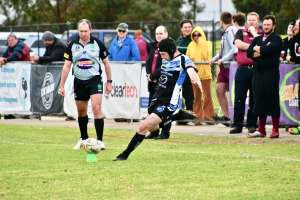 It was a case of so close, yet so far for the Rockingham Sharks, who missed out in a spot in the 2019 WA Smarter Than Smoking finals after finishing 5th on the ladder.

In a season that went right down to the final minute, Rockingham were denied a spot in the finals after losing to the Ellenbrook Rabbitohs in the last game of the season.

For about a month, the Sharks were arguably the form team in the competition – rattling off four wins in a row, including one over the previously undefeated North Beach Sea Eagles.

In a season of ups and downs, the Sharks came oh so close to making the finals in 2019, only to be pipped by the Rabbitohs during the last game of the season.

In a winner take all contest, Rockingham started strongly but were overrun by Ellenbrook in the second half to miss the finals. 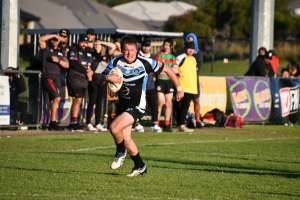 Luke Hughes played a starring role for the Sharks in 2019
Credit: Nancye Perrin

Coincidently, one of the Sharks’ best game of the season also came against the Rabbitohs – when they spoiled the Bunnies’ home opener 44-14 at Charlottes Pavilion.

Ellenbrook came into the contest with a massive hype about them after impressing during the pre-season and defeating the Willagee Bears in their Premiership debut.

Rockingham brought Ellenbrook crashing back down to earth, however, giving them a lesson in rugby league – running in eight team tries, including four to Robbie Smith in the win.

The team’s most impressive result, however, would have to be when they knocked off the previously undefeated North Beach Sea Eagles 21-20 thanks to a Sean Scott field goal at Rockingham Mazda Arena. The win kept the Sharks in the hunt for finals footy. 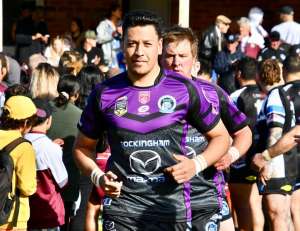 Logan Barclay was a standout for the Sharks in 2019
Credit: Nancye Perrin

The WA State Player of the Year and a member of the Struddys Team of the Year, Barclay had another strong season in 2019.

With five tries to his name in just 11 games, the centre was a constant threat to opposition defenders 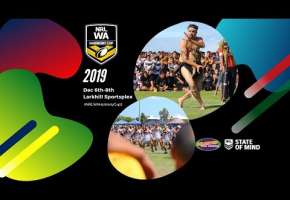