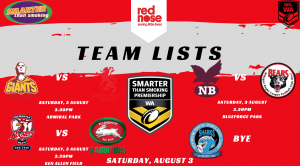 It’s as simple as this. Joondalup need to win this weekend against South Perth if they want to have any hopes of playing finals footy.

Currently sitting two points adrift of fourth spot (and will be four points if they don’t win against the Lions as the Sharks have the bye and two guaranteed points), the Giants can accept nothing but a win.

Having lost six of their last seven games, form is not on Joondalup’s side as they welcome back Brenton Scot, Luke Turner and Levi Mitchell for this weekend, while Sam DeFiddes and Connor Favell drop out.

South Perth will be up for the clash after falling short to Fremantle in Round 12.

Boosted by the return of Isaac Thomas who has recovered from a leg injury, the Lions realistically only need one more win to assure themselves of a top four finish. Can they get it on Saturday?

With a minor premiership still firmly within their reach after North Beach’s slip up last week, Fremantle will be gunning to make it four straight Premiership wins when they host Ellenbrook.

Aaron Hodges and Kerrod Hignett return from the side who defeated South Perth 28-20 last weekend with the impressive Takaroha Peneha dropping out.

Their opponents, the Rabbitohs are coming off a high-scoring 54-40 win over the Giants last weekend and still have aspirations of playing finals football in their inaugural season.

A win over the reigning premiers would significantly help their chances.

Ellenbrook have named the same halves pairing of Tyrese and Jaylen Grey for the third-straight week, while their entire backline remains unchanged from last weekend’s win over Joondalup.

Coming off their first defeat of 2019, North Beach will be without key players Josh Benjamin and Tayla McGregor as they host Willagee.

John Hough’s men will hope to prove last weekend’s loss to Rockingham was nothing but a minor bump in the road as they take on a Willagee side who are coming off the bye round.

All of Saturday’s games will be played to support and raise awareness for Red Nose Australia – a charity which helps families who have been impacted by Sudden Infant Death Syndrome (SIDS).