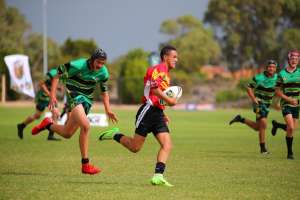 Quinton Dalton races away to score a try as Southern Pride claimed a three-peat of Under 15 titles
Credit: Energy Images

The Southern Pride created history at the 2019 Junior State Championships, recording a three-peat of Under 15 titles with a dramatic 14-12 win over the Northern Fusion.

Forced to play the final five minutes with 12 men following a sin-binning, Pride held off a fast-finishing Fusion to claim the title.

Gunning for a third-straight championship, Pride got off to a dream start as Quinton Dalton broke through the Fusion defensive line to race 50 metres untouched to score under the sticks.

Teammate Kaleb Jones then followed up with a long-range try of his own as Pride took a 10-0 lead into the sheds.

With the Fusion in need of a lift, fullback Malakai Chase stood up – dashing away for the game’s third long-range try, and in doing so, cutting the Pride’s lead to just four points.

Holding a two-try lead with four minutes left on the clock, Pride were reduced to 12 men after a sin-binning and paid the ultimate penalty – conceding a try to Ryan Woolley.

Woolley converted his own try to set up a tense run home.

With a man advantage, Fusion looked destined to score but coughed up the ball on the final play of the game to slip to a 14-12 loss and had Pride their third title in a row. 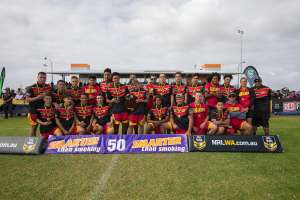