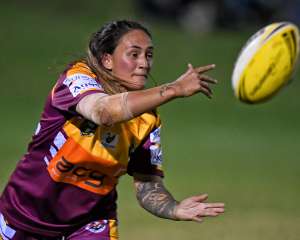 Joondalup Giants star Anneka Stephens says she wants to take her game to the next level after signing with the St George Illawarra Dragons.

The lock forward is the tenth player to commit to the Dragons for the Inaugural Holden Women’s NRL Premiership, and the first from WA.

“To be given this opportunity is something amazing and I am very thankful and blessed. I just want to take everything in and learn as much as I can to better my game,” Stephens said.

After impressing for the Combined Affiliate States at the Harvey Norman Women’s Championships earlier this month, the New Zealander drew interest from the Dragons but says she still has work to do.

“There is always room for improvement and no doubt they will push me to become the player I need to be to compete on the big stage. This year has been the first I have fully committed to rugby league and it has definitely paid off,” she said.

Dragons Coach Daniel Lacey says he is impressed with what he has seen from Stephens so far.

“Anneka is a player who will bring a real high work ethic to the Dragons. We saw her putting other players on their back on numerous occasions when she represented the Combined Affiliated States,” he said.

“When we approached her she was all for the chance to develop and improve her game being that she’s from Western Australia.”

Stephens will join her Dragons teammates for pre-season from August 1, with 12 players still be to be announced.