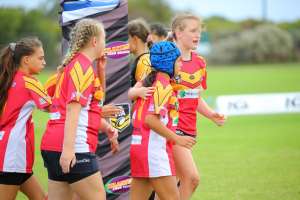 Player of the game Rosie McGehan celebrates with her title-winning Southern Pride Under 14 side
Credit: Energy Images

The Southern Pride finished strongly, scoring three tries in the final 11 minutes to claim a 26-12 win over Sport Schools WA Invitational to secure the 2019 Junior State Championships Under 14 girl’s title.

Pride’s Rosie McGehan scored two tries and kicked three goals to finish with a staggering 14 points to lead her side to the title.

Despite claiming wins in their previous two meetings in the tournament, the Pride found themselves behind the eight-ball from the off-set as Invitational scored two tries in the opening quarter of an hour to race out to an 8-0 lead – Phoenix Mahaki and Chevy Brinkworth getting their names on the scoresheet.

Led by the ever-consistent McGehan, Pride hit back with a try just before the half-time siren to trail by just four points at the break.

Pride took that momentum into the second term and soon hit the lead as Liana Tuhakaraina dotted down two minutes after the restart.

McGehan added the extras to hand her side their first lead of the match.

Keen to cause an upset, the Invitational responded immediately and reclaimed the lead as Brinkworth grabbed her second of the game to give Sporting Schools a 12-10 lead.

With just over ten minutes to play, Pride flexed their attacking muscles and took over the contest – McGehan, Shainai Proctor and Shantae Jetta all scoring tries as Pride went on a 14-0 scoring run to close out the game and the title. 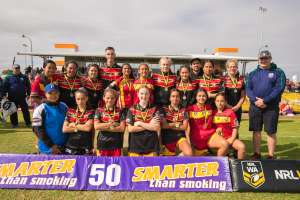