The Alkimos Tigers have finally broken their title drought in a 14-12 extra time thriller against the equally desperate Ellenbrook Rabbitohs. With both teams searching for their first male title, it was a game for the ages. For Alkimos, it would be more of a relief, as the best side for most of the season, and with such potential for greatness in their roster. For the Ellenbrook side, it was more a culmination of a season of redemption. With their male teams almost disappearing off the map this season, for them to be there on grand final was like a dream for the new look Rabbitohs.

With both teams feeling each other out in the opening stages, the Tigers took the early initiative, with a great kick from five eight Aaron Macdonald, forcing Si Gardiner to pick the ball up within his own in goal, and the desperate Tigers dragging him back to force a line drop out. With both teams then trading drop balls, the Tigers seemed to have the better running early, setting themselves up inside the Ellenbrook territory. Ill discipline kept hurting the Rabbitohs, and the Tigers had first chance at points from 25 metres out. But MacDonald missed the fairly easy penalty goal attempt, and the score stayed at 0-0.

This didn’t ease the pressure though and it continued to be all the Tigers running early. When Corey Broughton, who was the Player Of The Grand Final, hit centre Jojo Ranger in space, only a desperate hand from winger Jaquan Mahu foiled the Tigers attacking raid, but gave them another full set on the Rabbitohs line. And this time they wouldn’t miss. After a strong run from Will Akroyd left some defenders on the ground, trump card Codee Pomare hit the line at pace, and muscled his way past a bunch of defenders to open the scoring. MacDonald made no mistakes with this conversion and the Tigers led 6-0.

More ill discipline from the Rabbitohs, found the Tigers inside Rabbitohs territory, and when Manu Rakena went on a 20m run inside their territory, the Bunnies looked shot. And a last tackle raid from the Tigers was only foiled by a stray hand, and knock on went the way of the Rabbits.

While the Rabbitohs ball running was strong, with the likes of Tuveia Leon, Jesse Sheck and Will Ramsay looking extremely strong, their last tackle options early were alot to be desired. A poor mid field bomb immediately put the Tigers back in good field position, and more ill discipline put the Tigers right on the attack inside the Rabbitohs half. With strong running from Tuipulotu Lasike, the Tigers looked likely to score again, but a poor dropped ball let the Rabbitohs off the hook yet again.

Again and again the Rabbitohs continued to hold the Tigers out barely, but another chip kick inside their own half again gifted field position to the Tigers. And this time they wouldn’t miss. After some tough carries in the middle, the ball found its way to winger Pilimo Moala, who duly left 5 defenders clutching at air, as he stepped and bumped his way to the try line, to give Alkimos a 10-0 lead, and with most of the spectators wondering if the Rabbitohs were even going to fire a shot.

However the introduction of Carl Te Wani and Daniel Hohepa for the Rabbitohs breathed new life into the side, and they finally started getting some field position of their own. Although kicking just did not seem to be on the menu for the Rabbitohs in the first half, as they duly missed another penalty kick for touch to put themselves under more pressure. In the corresponding set, Broughton threw a pinpoint long ball to Nga Ioteva, who would have scored untouched if he had of hung onto it. And the Rabbitohs survive again.

With a 10-0 scoreline probably flattering for the under siege Ellenbrook side, it would take something special to get them back in the game. Tuveia Leon would be that guy. Getting a nice ball from second rower Shaan Evans, he would beat 5 players with speed and power, before offloading to support player Si Gardiner, who had enough speed to dot down in the corner and bring Ellenbrook roaring back into the contest. With Dylan Mahu converting from out wide, a 10-6 halftime score line gave the Rabbitohs an optimistic look going into half time.

In the second half, both teams came out with more purpose. The Rabbitohs seemed to shake their early game jitters and looks a more focused side, while the Tigers continued to up the ante defensively, controlling the play and slowing the play the ball. Unsung heroes Glen Wylie and Tommy Wihongi were strong for the Tigers, while Dylan Beniston, JP Duportail and Makiongo Richardson answered the call for the Rabbitohs.

Such was the nature of the tight contest, when the Tigers were gifted a penalty right in front of the posts, they duly took the two points and stretched their lead out to 12-6. And from the ensuing kick off Shaan Evans from the Rabbitohs found himself lucky to not be sent from the field with a shoulder charge penalty ruled against him. Although the Rabbitohs wouldn’t pay for the lapse, as the Tigers, sometimes their own worst enemies dropped the ball on tackle one.

Now it was the tigers turn to be ill disciplined. Three penalties in a row, put the Rabbitohs right on the Tigers door step, with the sin bin looming because of repeated penalties. But it wouldn’t be needed, with five-eight Te Wheoro Jones firing a perfect double cut out pass, to put Si Gardiner in for his second of the day, and give Dylan Mahu a chance to level it up from the sideline. And he made no mistake with the kick, putting it straight between the posts and squaring the ledger at 12-12.

But Mahu was soon to turn villain in this game as with a good set off the kick off, he attempted to put a good kick in on the last tackle. But unfortunately miskicked the ball and sent it spiraling into touch on the full. And the Tigers thought they had won it again with Ioteva going in to score, but he was brought back by an errant forward pass, to deny the Tigers once again.

With the game still in the balance, Jesse Sheck found himself with some room on the left touchline. A big fend put him in the clear and he found Tuveia Leon in support, who was desperately tackled by Ranger in the backfield, but a penalty was blown and chance for Dylan Mahu to put the Rabbitohs in front from a similar spot to the previous conversion. He unfortunately didn’t strike this one as well, but the Tigers still had a 20 metre dropout to give the ball back to the Rabbitohs. And the Tigers gave yet another penalty away, this time 30 metres out, and about 10 metres in from touch. Although the crowd and some of the bench were calling for another shot at goal, the Bunnies kicked the ball deep into the corner. With 3 centered hitups giving the Rabbitohs good position, Mahu had a chance to win it with a shot from 18 metres out. But the kick wasn’t his best and the Tigers escaped, sending the game into extra time at 12-12.

The Rabbitohs kicked off, and the first two tackles showed instantly that the Tigers were going to be tough to hold out. Jhai Kapea bounced out of three defenders to land on his front for a quick play the ball, and Tui Lasike followed him with a 25 metre run of his own which put the Tigers almost at halfway after two tackles. A penalty on tackle 3 for offside then put the Tigers right on the attack, and then another offside penalty on tackle three, 10 metres out, just to the right of the posts sealed the Rabbitohs fate. MacDonald duly knocked over the relatively easy penalty shot, to send the trophy to the far north, and complete a memorable season for the Alkimos Tigers. 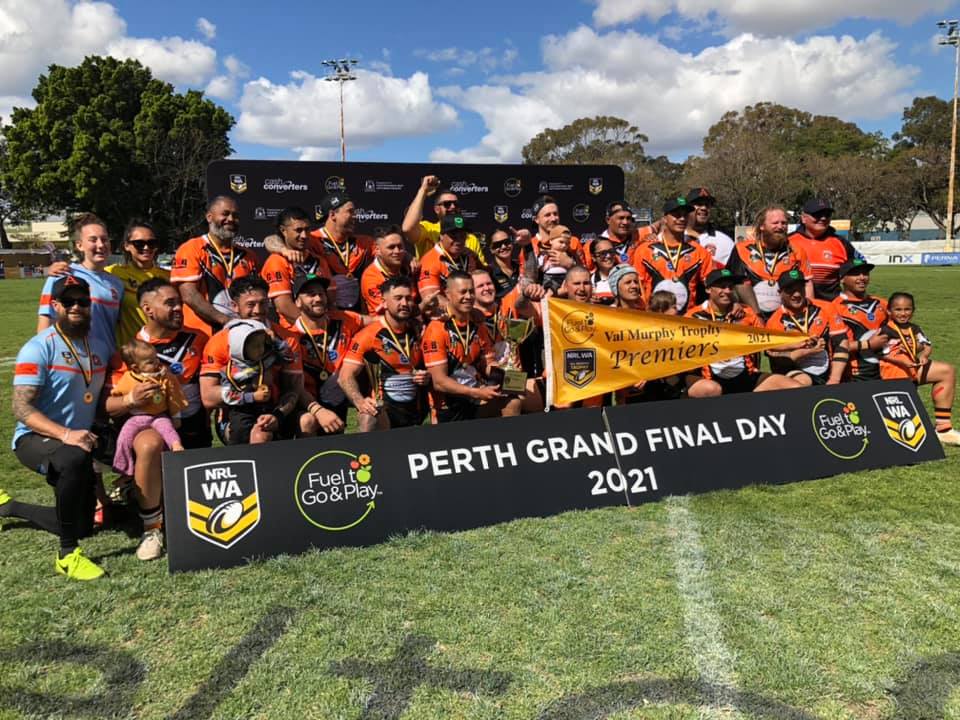