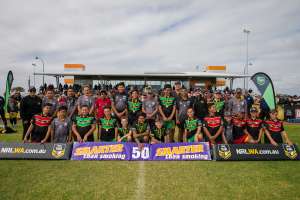 NRL WA and School Sport WA are proud to announce the 2019 Under 12 State Squad to compete at the School Sport Australia Championships in August.

The 25-man squad (which will be trimmed to 17), selected from the stand-out players from last week’s Junior State Championships, will represent Western Australia in the annual eight-day tournament between 3-10 August at Easts Rugby League Football Club in Brisbane.

Congratulations to the following boys: