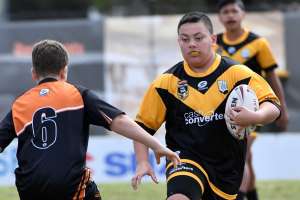 WA have won four games and drawn one at the 2019 School Sport Australia Championships
Credit: Facebook

They may only be small in stature, but WA U12’s are showing massive heart at the 2019 School Sports Rugby League Championships – carrying an unbeaten record into the final day of the tournament.

Having won four and drawn one of their five games to date, WA coach Nathan Benn says his side can hold their heads up very high.

“We’ve been pretty stoked with how they’ve turned up every day and got the job done,” Benn said of his squad.

“It’s really heart-warming for the kids – to go through the championships without being beaten so far, we couldn’t be prouder of the boys.”

After recording first-up wins over ACT, Northern Territory and South Australia, WA produced perhaps their best performance of the Championships – drawing 18-18 against a strong Victorian outfit.

“For me, that’s the best result I’ve achieved with the State squad,” fifth-year coach Benn said.

“To draw with Victoria, I was almost overwrought with emotion. I was so proud of the boys and what they had achieved in that game.” 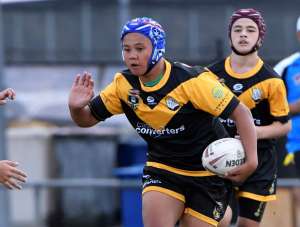 Benn praised the creation of the Junior State Championships, saying the tournament has helped improve the quality of junior state players.

“You get to see a lot more of what the boys can do and make better decisions about who should be in the squad,” Benn said of the Junior State Championships.

With players from Karratha, Bunbury and the Perth Metro area included in the original state squad, Benn highlighted the strength of junior rugby league in WA.

WA will wrap up their tournament on Saturday morning when they take on ACT at 9am WST.

“Hopefully we can get over the line,” Benn said.

NRL WA would also like to congratulate referees Byron Devene and Christian Tapu-Donaldson who were selected to travel over to Queensland to help officiate the tournament.