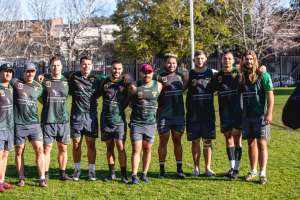 Once again, the South African National Rugby League team will have a strong West Aussie flavour to it with six WA-based players and coaches selected for the Rhinos’ up-coming Test Match against Italy in Sydney on Friday night.

All six were part of the Rhinos’ impressive 30-24 win over Malta in June, with 18-year-old Smith among the try-scorers on his international debut.

“It’s just a bond being around your fellow South Africans,” Smith said about representing his country of birth.

“I’d be very blessed if I could get that opportunity again – I’ll be looking to get over the white line.”

The win moved South Africa up three places to 32nd in the world rankings but the Rhinos will have their work cut out for them against an Italian side who sit 19 places higher in 13th.

“We’re just going to do our best and we’ll do anything it takes out on the park (to get the win).”

With Italy’s NRL players unavailable for the game, Smith senses an upset could be on the cards.

“It’s a real advantage to us. With them out it’s an opportunity to knock them off,” he said.

“Even though we’re the underdogs you can’t underestimate us.

“We’re putting together a really solid team here and Italy should be worried about us.”

You can catch Will and the rest of his South African teammates in action from 4.30pm WST via the South African Rugby League Facebook page.