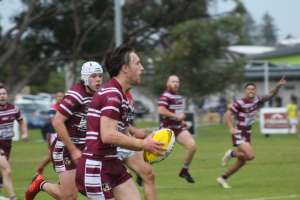 Jeremy Wallace scored two tries and set up another in a Player of the Match performance
Credit: Shelley Williams

Jeremy Wallace played a starring role – scoring a pair of tries as the North Beach Sea Eagles retained the Motor Neurone Disease Awareness Trophy with a 34-18 win over the Joondalup Giants in Round 9 of the WA Smarter Than Smoking Premiership on Saturday.

Wallace, who leads the competition with 13 tries, produced a dazzling performance to help lift his side to their eighth-straight Premiership win.

“I’m really impressed with our side – it’s always a tough game against Joondalup.

“I’ve played in three of these (MND Awareness Trophy games). It’s a great cause and done well by both clubs.”

Playing against the competition front-runners, Joondalup burst out of the blocks as player/coach Gus Marshall opened the scoring after just three minutes with the English five-eight pouncing on a mistake by North Beach fullback Brad Sharpham to touch down.

North Beach, winners of seven straight games heading into this fixture took a while to kick into gear but hit the board just past the twenty-minute mark as Wallace charged down Marshall’s kick before regathering the ball to dot down under the sticks.

Wallace was again involved just five minutes later as he shrugged off a couple of Giants defenders to put his side on top for the first time in the game.

A try to debutant Tayla McGregor on the stroke of half-time stretched the Sea Eagles’ lead, giving the visitors a 16-6 advantage heading into the sheds.

Looking for a way back into the contest, Joondalup started the second half as they did the first as Caleb Reedy stripped James Blake of the ball from the kick-off before Davey Martin danced his way over to bring the Giants within four points.

Playing with their tails up, Joondalup almost found themselves back on top but for a desperate try-saving tackle by North Beach winger Dustin Hume on Rodney Mauga.

After soaking up a heap of defensive pressure, the Sea Eagles struck on attack as Wallace set up the returning Greg Lingard who crashed over.

A Josh Benjamin try 15 minutes from time gave North Beach a 28-12 lead before Bow Stein made sure of the result with a try of his own following some great build-up play from Tye Saus.

Reedy scored a late consolation for the Giants, but his 10th try of the year wasn’t enough to prevent the Sea Eagles from claiming the MND Awareness Trophy for a second consecutive year.